Just yesterday The Washington Post posted an interesting article about the DC Cherry Blossom Festival. The title and accompanying image say a lot:

Mounds of trash take the bloom off Cherry Blossom Festival 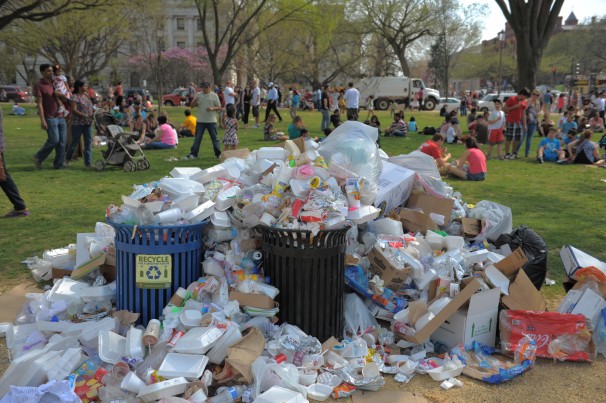 Plastic-foam lunch containers. A Ritz Crackers box. Rubber gloves. Empty 24-packs of Deer Park water. A Sprite can. A Starbucks cup. Milk crates. Commercial-size boxes of frozen Big-C Premium Select three-eighth-inch straight-cut french fries. All belching forth from, dumped around and cartoonishly piled over a couple of overmatched receptacles as if in some kind of Dr. Seuss book. From one side, the blue and brown cans were no longer visible beneath the crush.

“That’s ridiculous,” said Camaran Pipes, a project manager who stopped along the gravel path from the teeming Smithsonian Metro station to snap a picture of the pile. “This is the nation’s capital!”

Apparently those in charge of cleaning up the garbage fell behind early on when significantly more people than expected came to the Festival. And once you’ve fallen behind it’s hard to catch back up until the crowds leave. There were so many people that the trash trucks had a difficult time getting through.

To top it off, not everyone saw fit to at least throw their trash somewhere in the vicinity of an overflowing trashcan:

In some cases, bouts of bad citizenship were the issue. Carelessly tossed greasy napkins and plastic cutlery comingled with pink petals beneath some of the cherry trees that drew the throngs.

Sebastian Bush, 9, spent long stretches Sunday filling and re-filling a plastic grocery bag with the litter he found strewn on the Mall’s grass — including lunch-time remnants from a knoll near a line of food trucks.

If the trashcans are overflowing, is it really so hard to carry your lunch remains with you until the end of day? Littering is obviously a common problem in DC and surrounding Northern VA – but I think many of us would agree that throwing your trash literally beneath the nation’s famous cherry trees at full bloom is pretty low. There comes a time when we should show some proper tree care, as well as respect for our nation and those in it.