As discussed in a previous post, last week’s insane rain fall brought with it a massive amount of flooding here in Centreville and surrounding areas. Backyards became lakes and many trees suddenly found themselves trying to hold their ground in the middle of a rushing river: 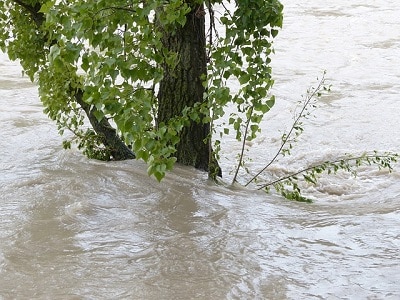 In some cases flooding can damage trees so badly that they need to be removed for the safety of you and your family. If you think you might be facing this situation, you need to contact a good tree service in Centreville to come out and assess the situation. Those of you who’s trees survived the flooding may now be breathing a sigh of relief. But unfortunately, flooding can cause a lot of damage to trees that is not immediately evident. It can be a month or even a year before visible symptoms start occurring. The following presentation from the Iowa State University explains the damage flooding can have on trees and the symptoms to look for:

Understanding the Effects of Flooding on Trees

A frequently asked question during the spring of 2008 as torrential rains and overflowing rivers plagued much of the Midwest was “how long will trees tolerate flooding before injury results?”…

‎Fortunately, a tree that has been damaged by flooding can sometimes recover if it receives proper care. The University of Nebraska-Lincoln has some tips for helping your damaged tree recover:

“Trees have a reduced root system due to root and mycorrhizal fungi death during the flood, so keep them watered during dry summer periods for the next several years as they regrow new roots. Apply a 2 ½ to 3-inch layer of organic mulch in a flat layer beneath the tree. The most commonly used organic mulches include wood or bark chips – cedar, cypress or hardwood- and shredded hardwood.”

As long as the tree is not obviously dead and doesn’t have limbs hanging precariously from it, you should be fine to let it stay around for awhile. Time will tell whether or not recovery is possible.